Today, it’s been five years since I hosted Atlanta’s first two-day Python programming intensive for women: Django Girls ATL. Since then, the women, coaches, and I have all grown so much.

I hope you’ll join me in revisiting the post I made then and celebrating how far we’ve come.

But today I also want to share a story from that day. Something I’ve talked about in keynotes — PyOhio comes to mind — but isn’t too widely known.

The night I launched Django Girls — after months of solo effort — I was crying in the bathroom because I found out I didn’t get yet another job as a developer.

You see, my goal was to make Django Girls Atlanta the friendliest, most supportive, and most caring introduction to code these women could have. I wanted to give them the Cadillac of coding workshops. I wanted them to have the world! I found the most empathetic coaches. The coolest space. The cheeriest decorations. The best prizes, before prizes were even really a thing. And of course this former chef would make sure the food was incredible–it was! You read the post, right?!

I wanted to give the women a Cadillac experience because I felt like that was the kind of introduction to Python they deserved. If they were going to do the hard work of learning to code, I was going to try to make them feel as supported and comfortable and safe as possible.

Django Girls was a truly special experience for me that I am so proud of. Many women went on to become full-time developers. It was a huge success. Looking back from five years, I am in awe.

But here’s the part of the story you haven’t heard–very few people have.

At the same time that I was learning to code and running PyLadies ATL and giving presentations at PyATL and planning Django Girls Atlanta… I was also trying to get my first job as a developer. Because of course I was! It was my dream!

I was a career-changer doing phone screens and tech interviews and in persons and building and deploying projects. I’d interviewed a lot over the last few months and was so full of hope that my dream of becoming  a developer would soon come true. After all, I’d quit my job six months prior to pursue this dream, and was living on dwindling savings. I even asked friends for help with my rent at one point.

Django Girls was a two day workshop. The first night everyone gathered together for a big meal, party, and time to set up your local dev environment. The balloons were blown up, the decorations were just right. People were arriving all smiles, so excited to get started.

Coaches were rolling in, too. And one of the coaches was the hiring manager for a job I’d just had an in-person interview for. I wanted this job so badly y’all! I hadn’t heard anything and it had been about a week, so I asked him about it.

We stepped into the hall. I could see our students excitedly meeting each other and the coaches. Squealing about the cute decorations, the cupcakes I’d made from scratch just that morning. Joy was in the air.

And he let me know that they would not be moving forward with me.

I was crestfallen. I remember exactly what I said:

“Ok, I understand. Thank you for letting me know. And thank you for being here tonight to coach Django Girls. I think it’s going to be a wonderful experience for so many and I’m glad you’re part of it.”

He thanked me too and went back inside.

I broke down. Sobbing, I rushed to the bathroom. I didn’t want to be seen. Minutes before our amazing workshop, I was crying in the bathroom, feeling like a huge failure.

Feelings I’d been struggling with for a while surfaced violently. Through PyLadiesATL and Django Girls I was devoting myself to getting other women excited about learning to code, saying “you can learn to code! You can change your life!”

I was telling women they could learn to code and change their lives and get jobs as developers…and yet here I was, jobless.  Just a learner with a blog and a willingness to spend all her free hours organizing coding meetups and workshops. Not “successful” in the way I wanted to be: as a developer.

I wrestled with this. Obviously, I wasn’t successful. But I held tightly to this belief, this hope, this faith, that if we all just kept working and supporting one another we would eventually get there together. If we had each other, we’d be okay.

And so I dried my eyes, went back into the workshop, and gave the women that Cadillac experience I’d planned.

We had a wonderful two days together. I checked in with each of them: how are you doing? How are things with your coach? Where are you in the tutorial? Can I get you anything?

And though I’d planned every little detail, it wasn’t the fun decorations or the tasty food or the cool space that the women kept bringing up to me. Of course they said they were thankful for these things. What they kept saying was how warm and welcoming I had been to them. How safe they felt. How I really made them feel like they could do this.

These women had no idea that the night before I was crying in the bathroom because I didn’t get a job as a developer.

I didn’t need to feel conflicted about encouraging others to pursue something I hadn’t yet done. This “problem” was merely an opportunity to be honest with others about how hard it really was. And in being honest, I could build an even bigger community.

I became an early advocate of talking openly about just how hard it is to learn to code. Of being real about the journey, and using frank language with each other about how challenging it is. How painful it can be. How isolating it can feel. How vulnerable you can feel asking for help. And why, because of these things, it is so very important to be supportive of the courageous people who are doing this very very hard thing.

So many people related to this message. More people spoke up, talked about how hard it had been for them. People who were struggling and frustrated felt comforted. More people felt willing to take the risk to learn. And so our community grew.

I share this story because my success and growth has always been inextricably intertwined with giving back & helping others. At every step as I sought to advance, I wanted to bring others with me. Even in the earliest, hardest, gnarliest and most hopeless days.

And you know what? 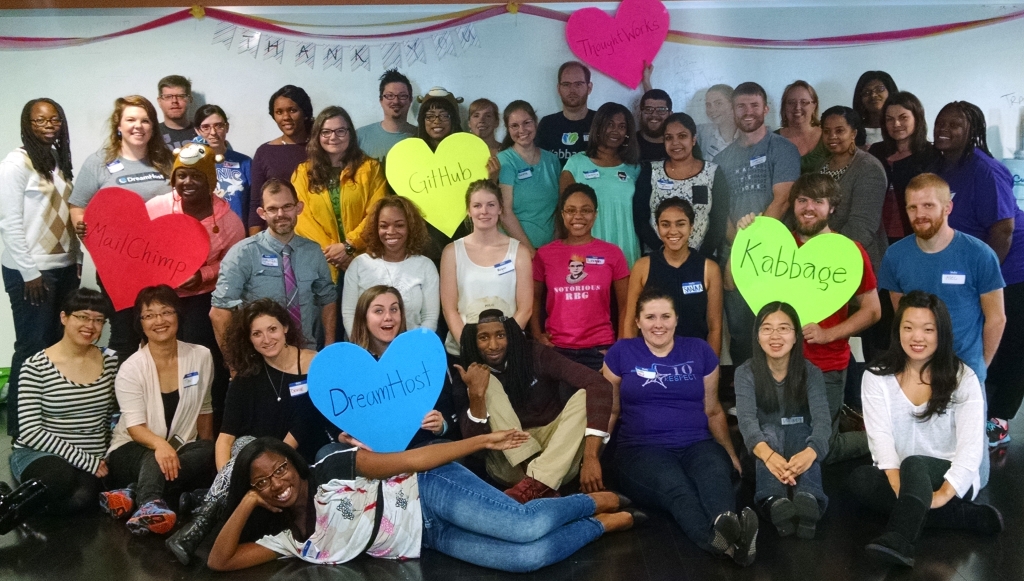 It was completely worth it.

Did you participate in Django Girls Atlanta 2015 and want to update the community? Please message me on Twitter at @adriennefriend, or use my Contact page on this site to give me an update. I would love to hear from you.